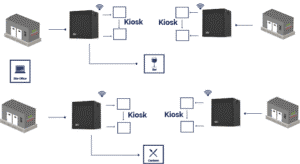 A Christmas market operator with an event in a listed building estate is working to reduce its carbon footprint. The owners of the buildings and landscape have a stated policy “To be a significant contributor to the economic, environmental and social wellbeing of our community and the communities around us” and are working with suppliers to achieve this. The event organiser needed to understand their power usage in order to develop lower carbon impact solutions.

IDE’s Erica power monitoring solution has been developed to support power management at events by recording usage across multiple
connections on a continuous and long-term basis.

By recording power used, and storing this in the Cloud, analysis can be carried out to identify:
> Where power may be wasted
> How to configure the event for lower usage
> Drive good onsite discipline.

For this project IDE monitored the event for the whole 10 days, with 4 mains distribution boards.
The event set up in figure 1 shows the layout of the site. The site is powered by a 4 100kVA generator sets, one for each quadrant, which are connected through an Erica enabled site distribution panel.
Data connection used the onsite WIFI facility.

Data collection was set to record results at 5 second intervals for each connection, which gives very good data analysis of power spikes as well as energy usage. The dashboard, as shown below, is a live feed from the distribution panel, helping the onsite team see the effects of turning power consuming equipment and facilities on and off.

The live dashboard was monitored during the market opening times to ensure each user was working within their power limits, and identify any potential socket overloading.

Post event, analysis was performed to assess the possibilities of energy saving and security.

The analysis of the data was conducted by the IDE team and key findings provided to the organisers. Below are some examples of findings, and not untypical of what has been discovered on other sites. The data is presented using Microsoft PowerBI, a popular business information suite capable of handling the very large data sets created by long term monitoring. PowerBI accesses the Cloud based data, runs the analysis and presents charts through a web interface. By using industry standard tools, many larger organisations in-house data analysts can create powerful reports linked to other business dashboards.

Correct sizing of generator can have a significant impact on both weekly rental cost, and more importantly fuel usage and reliability.

Under utilised generators run less efficiently and have less reliability due to carbon build up. When initially specifying site power often a theoretical worse case is assessed and the generator sized to meet this.

The graph, on the right, shows an example total power usage over the period for each generator.

The dash line is the generator capability (100 kVA in this case). The 10 peaks represent the on time for the generator, from 6 am to 6 pm each day.

As can be seen, maximum load is 28 kVA during the period, and fairly stable during each day. In this situation a 40 kVA generator would power the quadrant, with loading typically at 75%.

Using data from Atlas CopCo generator specifications, this could reduce hourly fuel usage by 0.3 l/h, equivalent to 144 litres over the 4 generators for the period, and 377 kg of CO2.

Reviewing each monitored output highlighted some users using close to, or above the allowed power. The graph, on the right, for one of the catering providers demonstrates this.

When all the ovens were on at the start of the day there is a period of 10 minutes when the load exceed the rated output.

To avoid nuisance tripping and an overload of cables the output should be upgraded to 63 A.

The graph below shows the typical energy profile during the day. The total energy used during the 10 days was measured at 8,900 kWh. By using the daily profile, and total energy a calculation can be made to assess the possibility to power the event from a mains supply and battery buffer.

Taking the total energy used, and splitting between the 10 days gives 890 kWh per day. This equates to 37 kWh average.

This could be supported by a 3 phase 60A supply charging a battery 24 hours a day, and the battery system delivering power as required during the market open hours. Whilst the peak load of 150A may well be beyond the local infrastructure at the property, a 60A supply may well be possible, or even 32A would allow a 50% diesel reduction.Moving to mains (grid) power is the most effective way to reduce cost and carbon emissions, especially as the UK grid is greener than ever.

We can see from the data that there is significant spare power on site, and whilst reducing the consumption from the generators is possible, there are diesel vehicles on site used to transport people from remote car parks. The event operator would like to use electric buses rather than the current tractor and trailer solution, but was concerned about charging them during the day.
The analysis has shown the spare capacity of a single generator could support 60 kWh of charging, enough to keep an EV fleet running.
Whilst this swaps one diesel use for another, the generator running at higher capacity would be more efficient than the tractors, hence making a saving, and improving the experience for event goers.